Ableism and why I named my blog "Redefining Normal"

This post has been on my mind for awhile but have been getting sidetracked with life and adjusting to my new job.  However, I feel this is a topic worth talking about especially in the 21st century in which there are numerous social justice movements that fight for the lives of oppressed and marginalized groups in the United States.  It is about ableism.  Unlike other movements such as racism, sexism,homophobia etc. this concept is less known and discussed when it comes to social justice within American society.  However, it is a concept that pervades all aspects of U.S. society and has either directly or indirectly oppress and marginalized people with disabilities.  Unfortunately, there is no way to talk about this concept in a way that does not sound angry. So try to bear with me if I sometimes sound angry when writing this post.  Since this blog is about autism and to avoid this post from getting too disorganized, I am going to focus solely as to how ableism affects the autistic community as a whole.

I am not the only autistic self advocate that writes about ableism.  Autistic advocates such as Lydia Brown and nonverbal autistic, Amy Sequenzia talks about how ableism affects the autism community and  their experiences of being autistic.  Ableism is a powerful concept because it has the consequence of some autistics not having access to education and employment, having access to supports and accommodations as well as being a barrier of living a happy life.  Growing up, I have been exposed to ableist concepts that in turn negatively affected my self esteem.  This was either overtly or subtly and sometimes within the autism community.  Ableist concepts that I was subject to was the notion of age appropriate interests, pushing for complete independence/ self sufficiency and the notion that there is only one way of social connections with people and friendships which is the notion of peer groups.    I have internalized these messages by reading so many autism books written by neurotypical parents and professionals as well as observing the direct and indirect messages from family, some friends and support people.  For instance, I was encouraged to join clubs which included a lot of group interaction, to dress like the other girls in school and to socialize with more same age peers than adults. Although the people in my life at the time had good intentions,  it had the unfortunate consequence of creating and sustaining an ableist script in my head which in turn lead to my low self confidence in young adulthood in which I am learning to let go.
Ableism also leads to false assumptions about the intentions and desires of people with disabilities.   For instance, in this media story a football player sits with a boy with autism who often wants to sit alone.  While on the surface it comes across as a heartwarming story to viewers it comes across as ableist by making the assumption that all autistics or people with disabilities should and want to sit with people and socialize during lunch.  Some people prefer to sit alone at lunch since it is their only time they can relax and take a break from being around other people.  I, myself am a  introverted person.  During breaks such as lunch, I prefer to have alone time since it  allows me to decompress especially if I am around people for most of the day.  Media stories such as the football player sitting with the autistic boy at lunch is an example of  "feel good" stories in which a neurotypical person is portrayed as "helping" a disabled person achieve "normal" or typical experiences is known as inspiration porn.    Inspiration porn-like stories have no direct benefit for people who have autism or other disabilities but instead portrays us as needy and that we should be treated with pity.

Challenging ableist views of society and that there is only "one" correct way to live and experience life is the reason why I named my blog "Redefining Normal."  I wanted to use this blog as an opportunity to educate others on how I see the world and to educate others that there is more than one way to live a successful and happy life.  .  However, the writings of self advocates like myself are under utilized as the works of well-known neurotypical experts and parent's accounts of autism are more valued by the greater society which promotes more ableist views on autism.  The good news is that we are at a time in which more autistics are speaking out and sharing their stories and that more people are willing to listen.  I think it is time that we have a dialogue about how ableism is pervasive in our society and how it is a social justice issue just like race, gender and sexual orientation.  If people are more aware and mindful of ableist attitudes, we have the opportunity to combat it and make society a more accepting and loving place for those who live with disabilities. 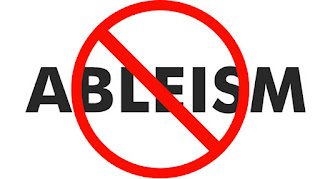 Posted by Christine Motokane at 8:57 PM