My experience with behavioral therapy

I mentioned in passing on previous posts  that I received behavioral therapy and that my therapist was the one who encouraged me to write a book.  Since this is a widely discussed topic in autism circles, I wanted to write in more detail about my experiences with behavioral therapy.  It is with this post that I want to discuss what I liked and dislike about receiving therapy as well as what I have learned throughout this process.

I went to various therapies in the likes of social skills classes, occupational therapy and speech therapy since getting diagnosed in preschool.  I don't remember much about these therapies to have an opinion since I was really little.  I did not receive the 40-hour a week ABA therapy that is prescribed to most people on the autism spectrum since it was too costly and my parents did not want to have therapists constantly around our house for so many hours a day.  It wasn't until end of middle school that I started getting true behavioral therapy.  Luckily, I did not receive the traditional Lovass style ABA that many autistic self advocates complain as trying to make them indistinguishable from peers,  although the behavioral agency that worked with me in eighth grade had a IEP goal that treated my need for proprioceptive input by jumping up and down as a behavior that needed to be extinguish.  After the agency, I started seeing a privately paid behavior therapist that was recommended by my mom's friend who also had a daughter on the autism spectrum.  As stated previously, the reason why my therapist was brought on because I had great difficulty regulating my emotions as well as having great difficulties socially.  My parents were concerned that I was entering high school  I did not have the tools to effectively  manage the transition and deal with the demands.  At first, I was resistant to working with another therapist since I had a bad experience with the agency that previously worked with me.  However, when I first met her, I was incredibly shocked about how personable she was.  During our first session, she promised that she wouldn't push to do things I wasn't comfortable with.  This made me more receptive to receiving therapy.

I am now going to talk about how I benefitted from behavioral therapy.  For one thing,I learned to regulate my emotions better to the point that I no longer throw meltdowns on a daily basis.  I am also happy I no longer have to rely on medication to effectively manage my anxiety.  Part of how I learned to manage my emotions was through the zones of regulation curriculum.  The zones referred to colors that represent the various moods and emotions a person experiences ( e.g. green means calm, yellow means  stressed out/anxious and and red means upset/angry).  During our sessions, my therapist and I would write out the various antecedents and try to match them to the appropriate zone.  Once I identified the specific triggers that made me go into each zone or mood, I was able to gain a deeper understanding of my emotions which led us to develop a series of coping strategies to learn how to manage when I am in the red and yellow zones.  Another benefit I gained from behavioral therapy was that I was encouraged to develop self advocacy and self determination skills.  To achieve this,  she let me set the agenda for our sessions of what I wanted to talk about and work on.  As stated previously, she encouraged me to write my thoughts down in my journal which allowed me to write a book.    She also made me more self reflective by making me go deep by "unpeeling the various layers" of what is bugging me.  This allowed me to have a lot of Aha moments during therapy and allowed us to problem solve.  I also learned to put things into perspective in therapy by drawing a line down the piece of paper of what I have control versus what I didn't have control of.  The bottom line is that if I didn't receive behavioral therapy when I was younger, I wouldn't have achieved so much like graduating college and getting my first job.

Now I am going to discuss some of the things I don't like about behavior therapy and how I feel it should be improved.  My biggest criticism that I can think of is that behavioral therapy is very one dimensional or that it is so focused on skill building that it doesn't take into consideration other things like mental health.  I started realizing this as I got older as I got more in touch with my core values. An example I can think of was when I was sent to a two week camp against my wishes that my therapist was running during the summer before my senior year of high school.  This "camp" was not your typical camp in which it was full of arts and crafts and fun activities.  There were only four campers in this camp and we all stayed in a small house.   During those two weeks, I felt that my therapist wanted to use that camp to emphasize teaching skills and to see how well I can do independent living skills.  This was measured through various activities such as doing an exercise in learning teenage trends by sorting out what was "cool" or "uncool."  Another part of the camp that I did not like, was that all of us had to do chores like clean the bathrooms or kitchen.  I felt frustrated and I felt that I was put under a microscope.  I let my feelings out by rebelling at the camp.  Another issue or criticism I have with behavioral or any therapy for that matter was the disconnect that sometimes occurs  between therapist and client. I know that there are strict confidentiality laws which prohibit a therapist to get deeply involved in the clients' lives but in the autism world  just spending an hour with a therapist sitting and talking  is not enough.  My therapist only saw a small fraction of my life but was not there for day to day stuff like my parents and aides were. She had other clients and other responsibilities.  The fact that there were 23 hours and 6 days that she didn't actually see me led us to have some disagreements about how to approach certain things and I sometimes felt she wasn't  seeing where I was coming from on certain things.  A final issue that I had with behavioral therapy was not so much the therapy itself but sometimes with my therapist's personality.  As much as my therapist was my greatest ally and I felt that I can confide on her for most things, there were times I felt that she was a little too confrontational during our sessions.  Towards the end of last year, I felt her getting increasingly inpatient during our sessions as she started adding more things on her plate (such as opening  her own business).  For instance, she was so concerned about me taking on my recent job as a behavioral aide that she started questioning every aspect during our sessions.  It got to a point that our sessions would make me end up in tears and it wasn't helpful anymore.  After  10 years of working together,I made the hard decision to stop therapy because I felt it wasn't helpful to me anymore.  I wanted to have a new start without having to turn to a therapist about how to live my life.

My 10 year journey with behavioral therapy shows that therapy can be beneficial to optimizing outcomes but there comes a point that it may not be helpful anymore.   I know that there is a lot of controversy regarding behavioral therapy with some self advocates having strong opinions about it.  The truth is that with the right therapist and right approach it works.   I learned so much about myself  and  gained a deeper understanding about my thought process thanks to my behavioral therapist.  She taught me skills that most neurotypical people my age haven't mastered yet.   Her personable approach is something I admire about her which helped me warm up to the idea of therapy.   At the same time, things can change in regards to the rapport between therapist and client.   Don't be afraid to stop therapy if you find that you are having issues with your therapist.  As stated previously, my therapist and I worked really well for 10 years before it got to a point where it wasn't working out.  It maybe time for a new approach or find other avenues in which to receive support. My experience has also given me the insight that behavioral therapy might be beneficial at a certain developmental stage but can be less effective or can have detrimenttal effects as one gets older or moves on to another stage of life.  This shows that autism doesn't go away but it needs to be treated differently throughout the various stages of life. 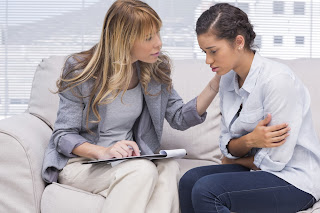 Posted by Christine Motokane at 5:20 PM