Last weekend, I went to see the Emoji Movie.    Despite its extremely low scores on movie review sites such as Rotten Tomatoes (it has a 1 star rating), I decided to bite the bullet since I am a fan of both animated films as well as emojis.   I don't go by ratings and reviews when I decide if a movie is worth seeing  but more about the aesthetics or genre of the film.    Overall, the movie was surprisingly good.  I was shocked about the deep messages embedded in the film which I am about to explain in more detail below.

To give you a brief overview of the plot,  the film takes place inside the phone of a 14-year old teen boy named Alex and the city of Textropolis (where all the emojis live).  The film is taken from the perspective of Gene who is suppose to be a"meh" emoji but ends up making up more than one emotional expression.  He aspires to be a working emoji in which his expression is used in text messages.  However, an incident happens on his first day on the job which resulted  in making the wrong emotion.  This incident made him a "laughing stock" among the other emojis who ultimately ostracize Gene.  Gene soon becomes ashamed of who he is and wants to go to the cloud to get reprogrammed so he can function normally.  He enlists two friends who accompany him: High-Five a handshapped laid back emoji with an Australian accent (who wants to be a "favorite" or frequently used emoji) as well as a gothic  code breaker named Jail-Break.  The three of them journey through the dimensions and worlds of the various apps that occupy Alex's phone to get to the cloud. Throughout the journey, Gene begans to realize the innate gifts of his idiosyncracies (the ability to make multiple emotional expressions)  with the assistance of Jailbreak.  His quirks is what ultimately saves the rest of the emojis from a threat that affects the entire phone.

I personally enjoyed the movie because of its overlying central message of embracing differences and that everyone has their place in society.    As someone on the autism spectrum who is programmed differently from everyone else, this message spoke volumes to me.  Growing up, I was made to feel that my different way of looking at things was not valued and that if I were to have friends and live a good life then I must conform and be like "everybody else."  Gene was made to feel ashamed of his natural ability of making several different emotions because emojis were only programmed to make one expression.  In the beginning of the movie, you can sense the other emojis' negative reactions towards him (ignoring him, making fun of him etc.).  I loved that he eventually finds two friends who embraced his differences and helped him appreciate his idiosyncratic way on looking at the world.   In my own life, I am lucky to have supportive family and friends who are helping me get to a place of acceptance and see the good of my autism.  However, the character I admired was Jailbreak who played the biggest role in getting Gene to see the good of his unique abilities.  She is also different and views herself as an "outcast" in the emoji city of Textropolis.  In my own life, Jailbreak reminds me of one of my friends who is on the autism spectrum who embraces my unique abilities and gets me to see the "good" of my abilities.  The emoji movie did a great job by emphasizing a supportive community and that you don't get to the point of acceptance without help and assistance from others.

Another central message of the film that I admire and can tie into neurodiversity is that everyone has their place and can contribute to society.  This was evident in the ending of the movie.  Gene realizes that his unique ability to make several emotions has value and ends up saving everyone in Textropolis.  How this ties into autism, is that autistic people have unique talents that can be valuable contributions to society.  Too often these abilities are overlooked and as a result there is a huge unemployment rate among the autistic population.  I liked that Gene was given a second chance of getting his emotional expressions used  as a text message and ultimately was successful.  In my own life, I liked that my current workplace gave me a chance and opportunity at being a behavioral aide despite knowing about my autism diagnosis. They saw that I had a unique perspective and saw my autism a valuable contribution in getting to help kids.  I loved that the emoji movie really delved into this topic of value and worth in those who are not considered "normal" or "different."

In sum, the Emoji Movie is probably one of  the few animated films for children that has invaluable lessons alongside other films like Inside Out, Finding Dory and Zootopia. It teaches children to accept and embrace people who are different.  But more importantly,  the emoji movie makes us challenge the idea of "normal."  I like that we are heading in a positive direction and that more people are challenging the prescribed and arbitrary "rules" of society.    Being "normal" and "like everyone else" can prevent us from being creative and finding new solutions to current problems.  This is what I took away from seeing the Emoji Movie.    On the surface it might look like a cheesy kids movie, but it has some insightful powerful messages that  even adults can takeaway.   If anyone wants to see another powerful animation and cares about neurodiversity, then I recommend this film. 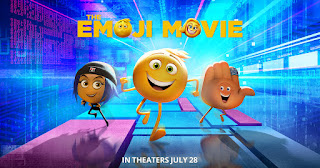 Posted by Christine Motokane at 11:07 AM