What Inside Out has Taught me about emotions and mixed feelings

I know this post is a year late as the hit Pixar film Inside Out was released last year.   Back then, my blog was not in existence and was not dedicated to writing at the time.  But recently this topic has been seeping through my head especially after seeing the newly released film Finding Dory and dealing with my own emotions that I decided I want to write about my insights from the film and how it relates to my life with autism (better late than never).

To give you a brief synopsis, the film centers on a girl named Riley and her emotions Joy, Sadness, Fear, Disgust and Anger.  Everything seems fine in Riley's life until she and her family move from Minnesota to San Francisco.  This is when everything in her world starts to turn upside down.  She has a hard time adjusting to her new life in San Francisco as she seems moody and depressed thanks to Sadness messing around with Riley's core memories. Sadness starts to feel bad for messing everything up but eventually she starts to realize that she plays a valuable role in Riley's life. What makes the movie relatable is the  central message of having mixed emotions and that it's okay to feel sad sometimes.  Oftentimes, society expects us to hold a positive attitude all the time even when we don't feel like smiling.   However, it is unrealistic to be happy and hold a positive attitude all the time.  Let's face it, life is not all good and can really suck at times ( hence the term "life is a bitch").  I would be so hard on myself for not feeling happy and positive all the time and felt there was something wrong with me anytime my head went into the negative.   However, I learned that both happiness and sadness are very important emotions.  In fact being overly happy is not good either. For instance, I personally found Joy being insensitive at times during the film especially in the scene in which Bing-Bong (Riley's imaginary friend) was distressed about Riley not remembering him in which she proceeds to tell both Sadness and him to put on a happy face.  Sadness, on the other hand  seems more in tune with Bing Bong's emotions and distress and tries to connect with him.  If we were constantly happy and peppy all the time, we would take things for granted.  Sadness and other negative emotions helps us appreciate the good times and treasure them.  It can also help us connect with others on a deeper level.  In Inside Out, it was Sadness that helped Riley appreciate and treasure her moments in Minnesota and helped her express her feelings to her parents. What Inside Out has taught me and society is that it is okay to feel vulnerable and to allow permission to feel sad.  Both sadness and happiness are both important feelings that make up the human experience. 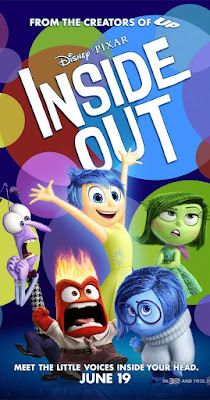 Posted by Christine Motokane at 8:53 PM